As opposed to the previous thread heres the contorversial part 2

This is the ute as it stands today minus interior...

minus engine and gearbox 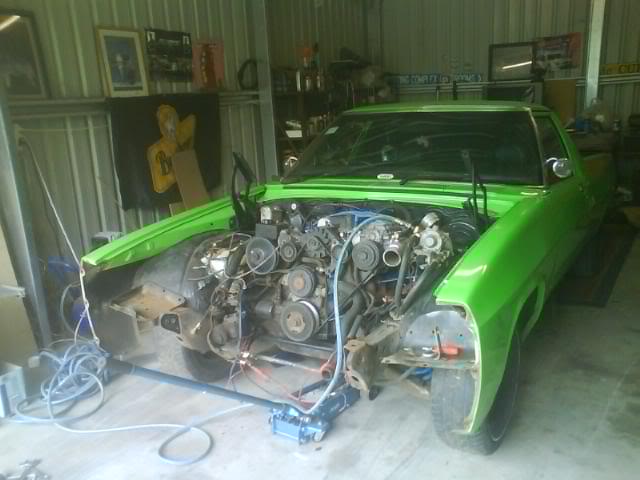 and the VN Berlina 5l V8

I bought some Primer and GMH black today to give the guards and firewall a quick spray i will be painting it myself as i want to learn and the engine bay no-one really has to see
i have some vinyl to repaint the dash and rooflining and visors as there brown... the driers seat got dropped off to my local trimmer for the sides to be fixed i have a centre console from a state-o... a new passenger door and a block of wood to knock out the dent and my uncle will be doing the rest of the work... 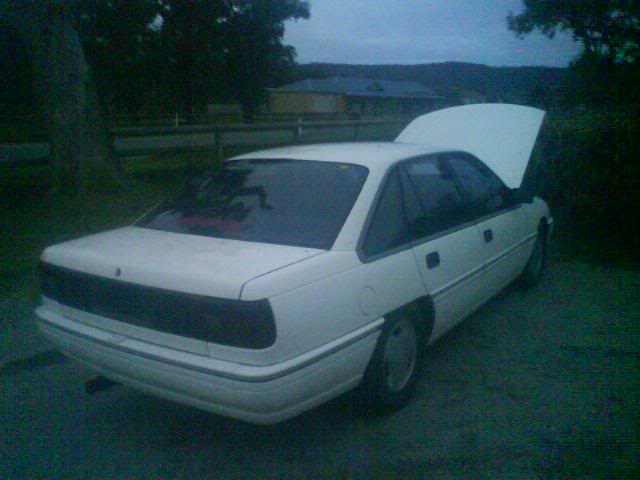 Hey josh your post says
This is the ute as it stands today minus interior...

minus engine and gearbox

I still see a engine in there.

Good to see your getting rid of the six pack and getting a 8
Fixed the damage up the side yet?

Good luck with your ute and the thread

ok gotta get some pictures together

hopefully i can find anotehr ute with a 308 even if its rusted to the shithouse as i need the engine mounts and i want some of the side of it as the ute has taken a nasty hit in the side
engine mounts are needed
coz the previous nub nub owner welded commodore V6 mounts on the frame... DOHHHH

the previous exhaust system is going to be modified to suit the V8 which according to my sponsor/mechanic shouldnt be to hard
undecided on what cam yet i was thing
crane 286 but then i was thinking that would be more suited to a stroker motor
so what would be better???

A Crane 286 cam is way to savage for a stock injected 5.0ltr engine, port & polish isn't needed either unless your building a big power engine, these heads flow excellent in standard form. These mods are better suited to a high compression engine or 355 with other mods. Not having a go at you, just trying to save you some coin. Do a bit more research into modding these engines before spending your money & you'll be wiser for it.

you owe me three cartons so far


see i do keep tabs lol

and you can grab the monts off any hq-z

yeah thats what i was saying about the cam

what would be more suited??? to give me a little more power under my foot?

Its to go with the one he has on his shoulder.

Because everytime he opens his mouth his brain is still in nuetral and people pick him up on it.

Its all so called foot in mouth disease???

yeah thats what i was saying about the cam

what would be more suited??? to give me a little more power under my foot?

My Orchid Torana has a mildly worked injected 5.0lt & i run a Crane 268 cam to keep it reliable & driveable. It also meant heavier valve springs weren't needed too. It goes noticeably better than what it did stock standard. If you only want to change the cam, you're better off staying conservative on the profile you choose.

like i said dont much about computer age crap...

crane 268 do you have specs LH what do you mean by Mildly worked???

all i want is something a bit better then standard as its going to be my new daily drive... fuel is not an issue if your wondering...

I don't have specs on the cam, maybe check the Crane website for these. The engine in my Orchid LH has the 268 Crane cam, 0.030" over flat top pistons & 0.020" machined off the head faces to raise the compression, manifold port matched to the heads & 71mm Yella Terra throttle body so really it hasn't had alot done. I retained the stock valve springs & apart from refacing them the only other work done to the heads was a set of guides & three angle valve seat grind. This engine still runs a factory VN ECU & memcal & set at the factory timing spec it has never detonated or run poorly but still goes alot better than standard. It's no drag car but bang for buck it's a good combo built on a reasonable budget & i've used it as a daily driver with surprisingly good fuel economy.

me and quagmire sprayed the inner guards black today

the interior is all pulled out now...

im not sure on which wheels i should go though

and same thing with the cam as LH SLR 3300 suggested most probably a 268, decent exhaust system and a Haltech should do alright

thats it for know...

or buy my hotwires and power steering lol

coz of its bright green colour?

Why waste money on the Haltec???

The standard Delco will do everything you want to do.

Haltec is only really needed if your chasing big big hp or running boost from what i have gathered.

Why waste money on the Haltec???

The standard Delco will do everything you want to do.

Haltec is only really needed if your chasing big big hp or running boost from what i have gathered.

I agree, plus the money spent on the Haltech can buy a decent cam, lifters, timing chain kit & all the gaskets needed to give the 5.0ltr the extra go you're after. You may even have enough coin left over to put toward a decent exhaust system for the car.

Joshy boy, got some spare VT grey tops if you want to buy them. I have green top 42lb injectors now.

Haltech is a waste of time for a stocker too. Alan gibbs will be retuning my delco. Ive been on a chipmaster Kalmaker tune with the 355 for 4 1/2 years without a single problem, but will need a retune after the rebuild with come racing ttb manifold, solid cam, girdle and head mods..

Dan was it a stocker? my mate had a VS 5.0L and put a 286 in it and the guy who tuned it said it was to big for a stock Motor he would of got more power with a smaller cam.
dunno if comp has alot to do with it but 308's have higher Comp then 304's

Back to Non Torana Projects & Plans