Also what Die did you use for your seat belts? I recently got some belts and they are in great condition, yours came up a treat. It would be worth having a crack with the ones I got too I think.

Sent from my SM-G965F using Tapatalk

Get a quote from seatbelt solutions to have them rewebbed.

If the belts are faded they may not be any good as a safety device.

For a few sections, I used Mr Black on the best condition belts I could find.

I'm comfortable enough with the condition of the belts I've used from a safety perspective. I'll keep some spare rears that can be re-webbed in the future if I feel so inclined.

Smoothed any damage off the seatbelt bolts and and had them re-zinc'd a while back: 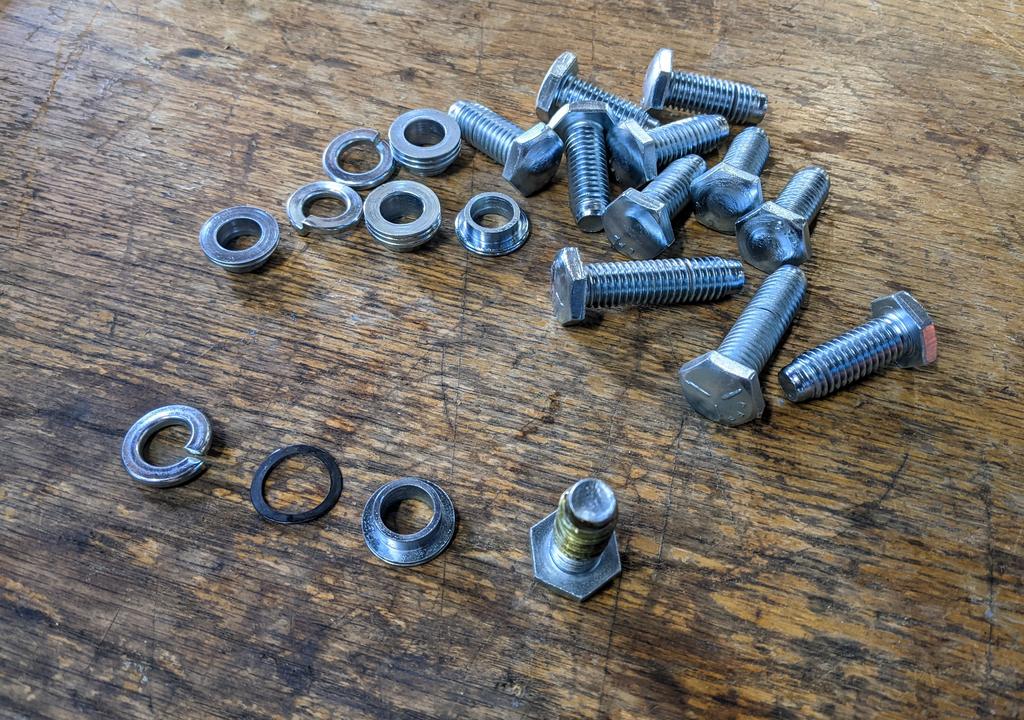 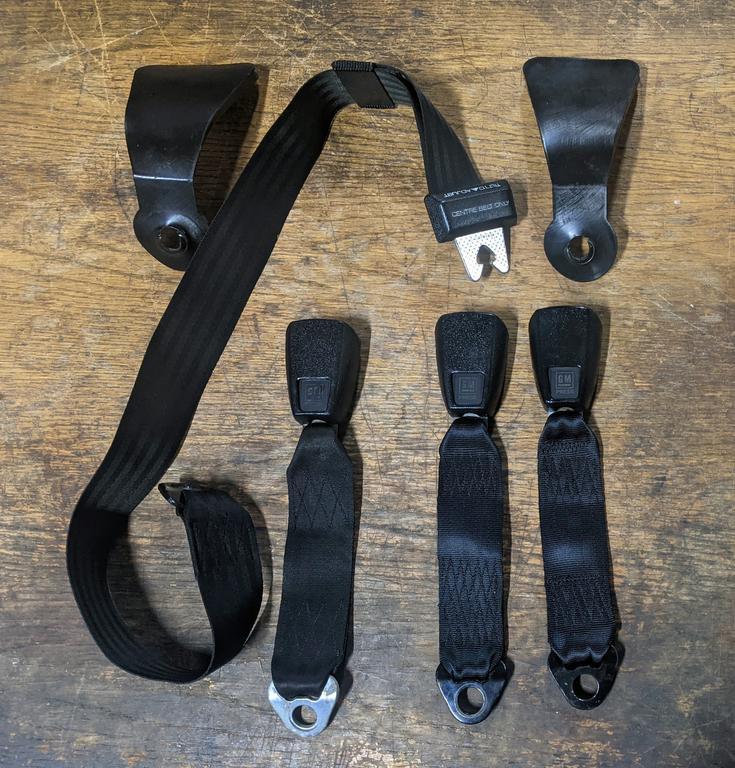 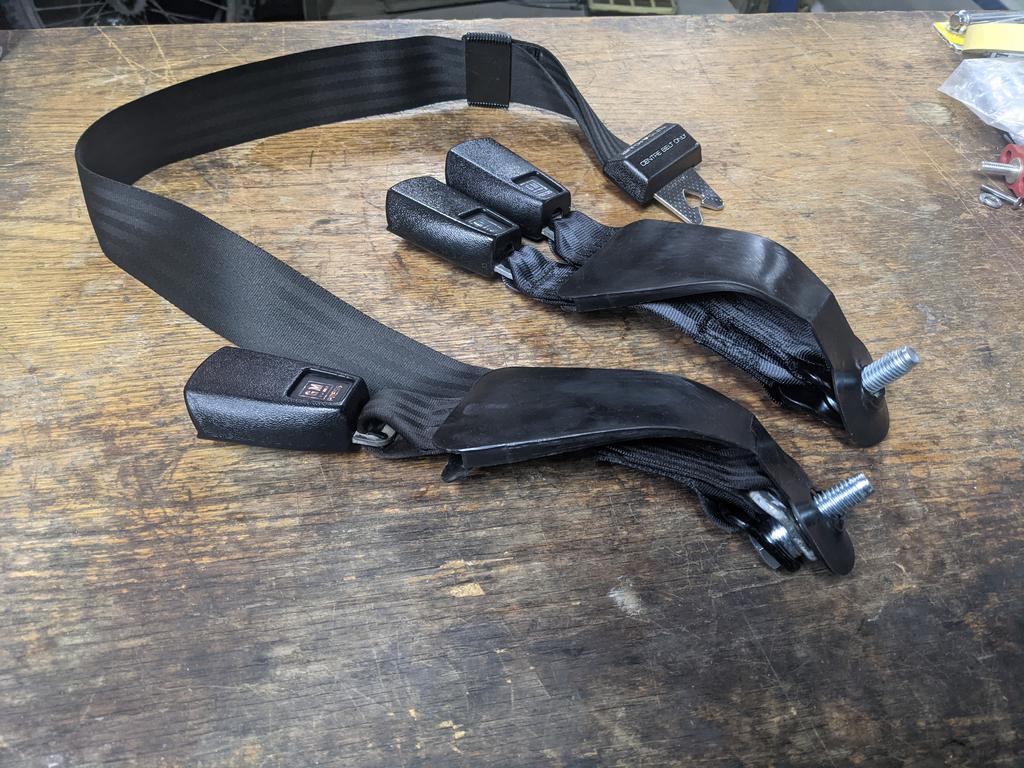 Stripped back the rusty steel parts of the seat belt retractors and painted those areas in black cold gal also, prior to re-webbing: 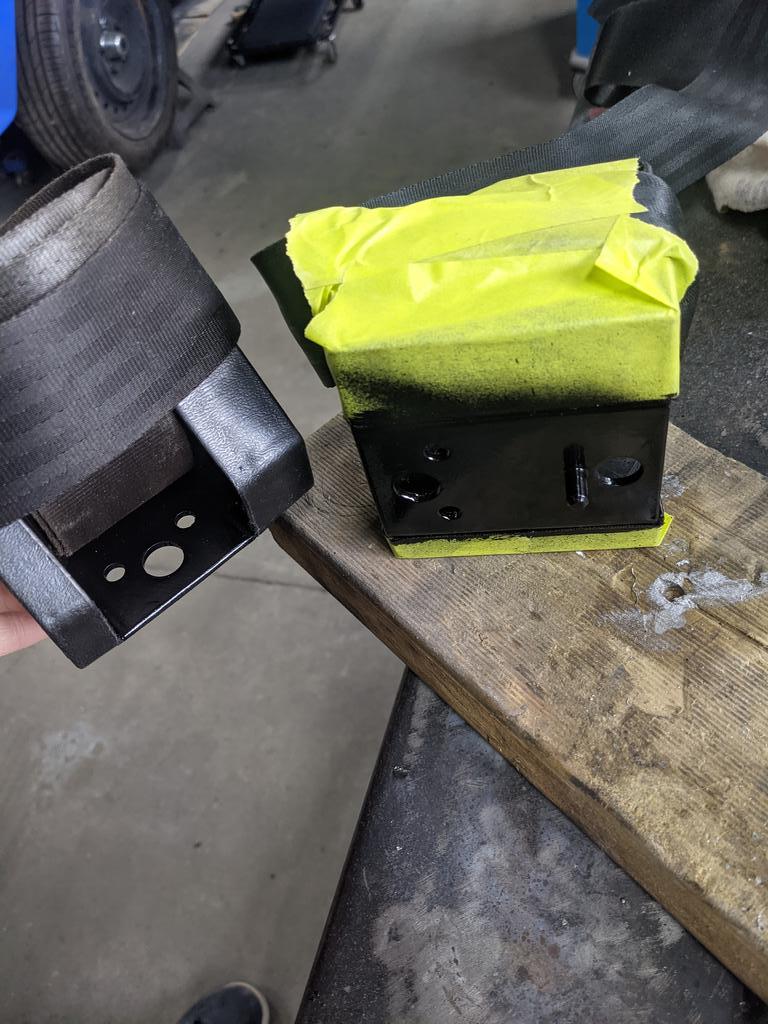 Restored vs. old. - also managed to get new stainless/chrome shoulder loops that the original trims clip onto! Very cool. Although I did have to drill/grind the holes out carefully to fit the Torana Ferrules. They were designed to fit the smaller (gold zinc) metric bolt shown in the photo. 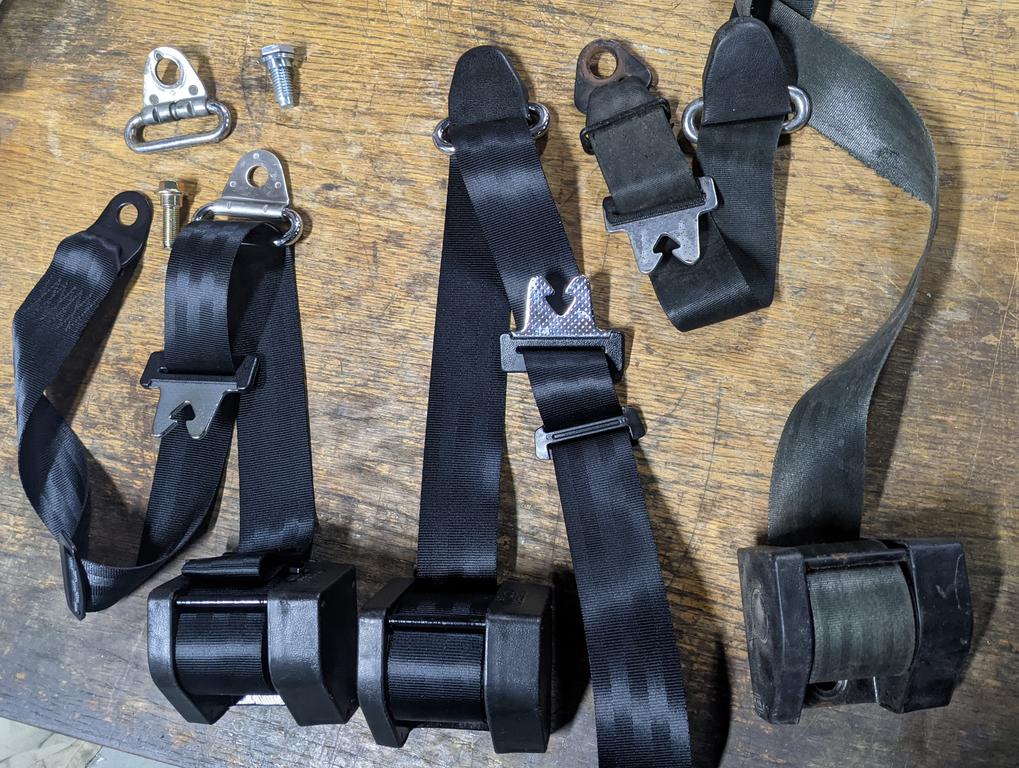 So years back I bought one of those nice cast alloy Dellows gearbox crossmember: 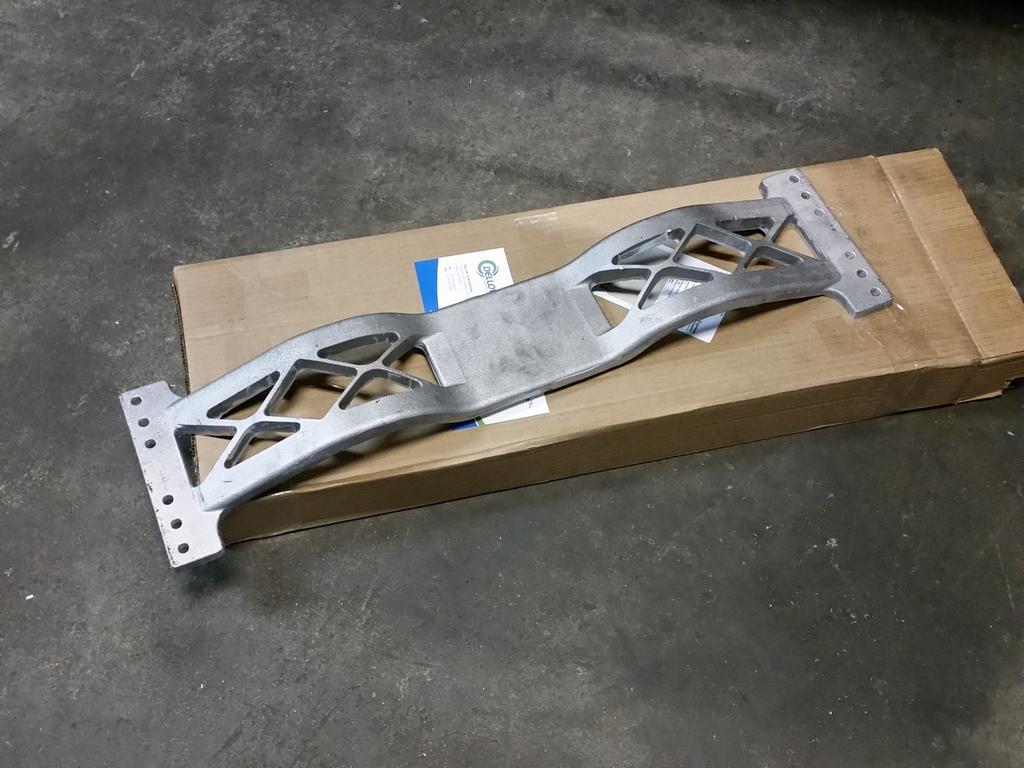 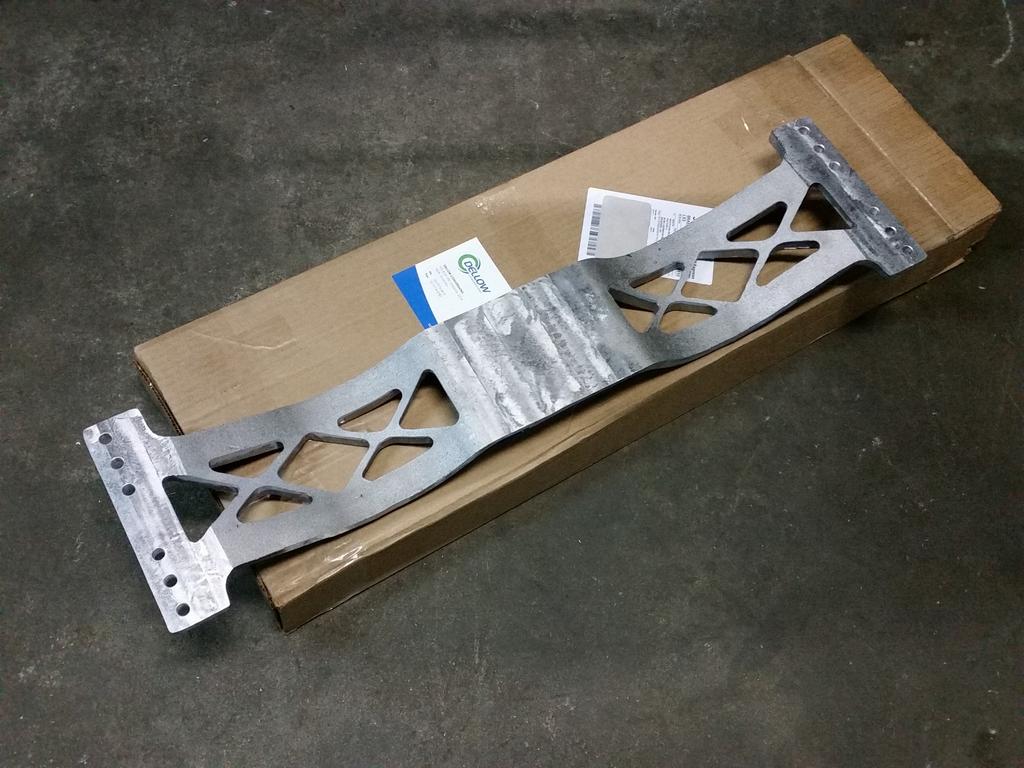 And cut a bit of a chunk out of it to fit around the lower section of the TKO 600 extension housing. 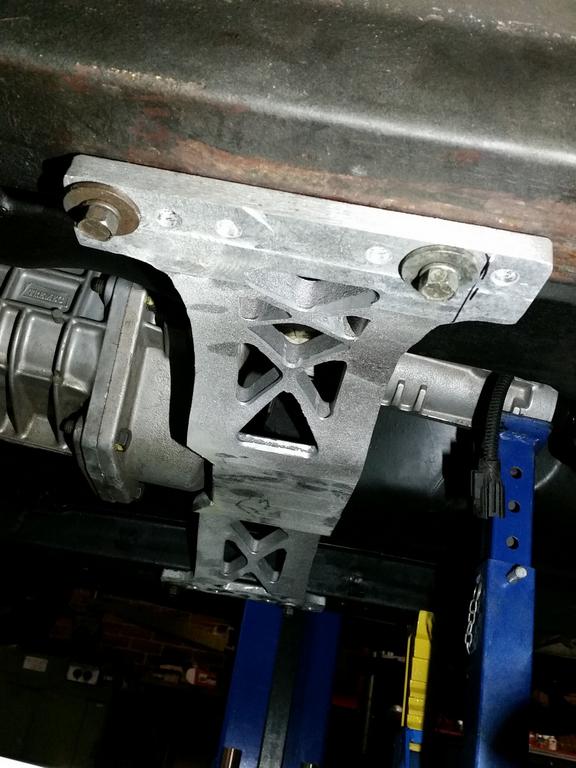 Anyway, to get the box sitting at the right height in the car, I needed to space the gearbox mount up about 20mm, so cut a piece of ally plate to suit: 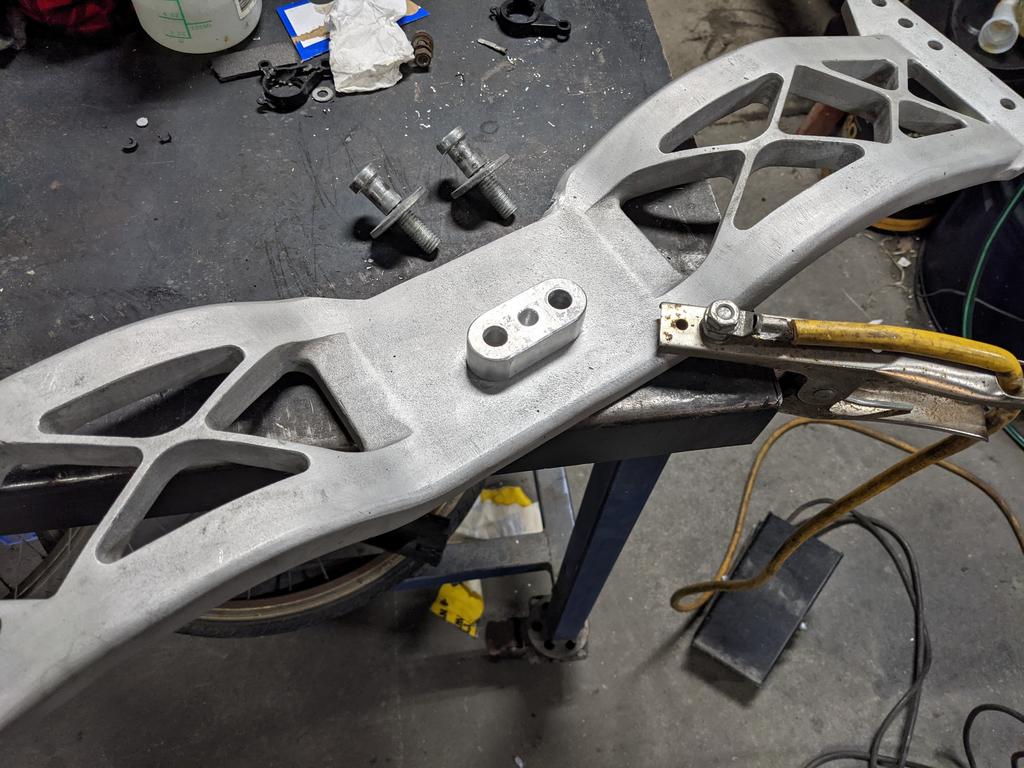 Used some spare door strikers to hold it in position when I welded it on with the TIG... that was really pushing the limits of what my welder could do!

And I love the triangular pattern in the crossmember, but I didn't like the look of the big slab of solid ally in the middle. Spent ages drilling and grinding out some more triangular shapes and losing the extra material from around the mount: 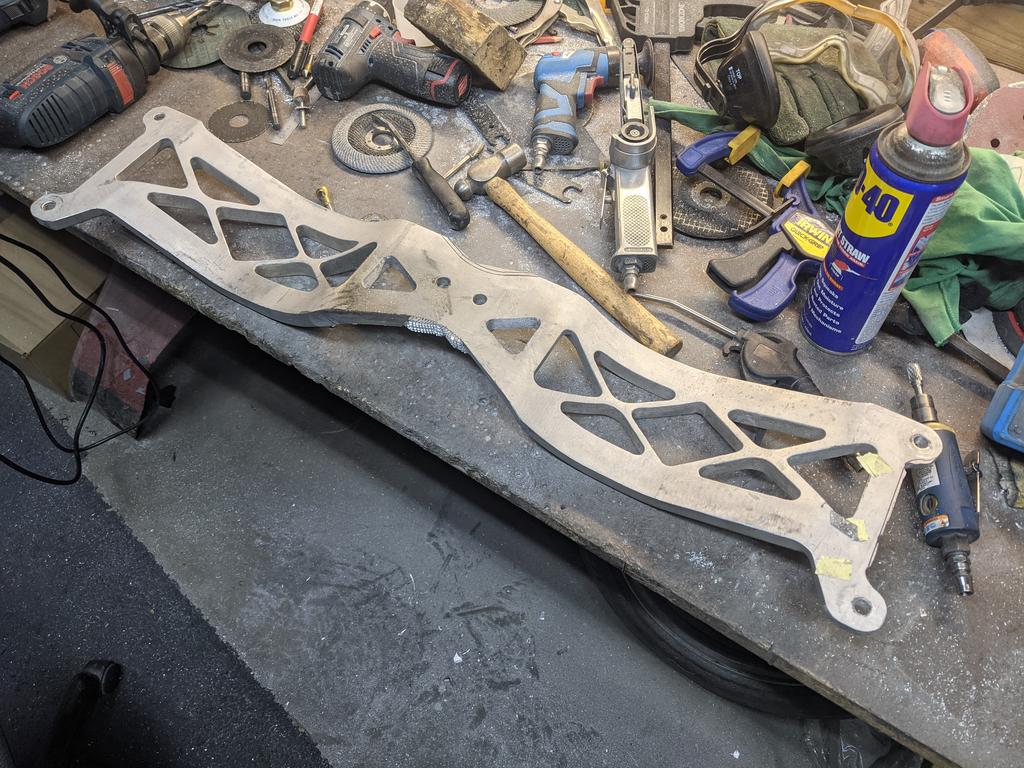 I think it's a much nicer aesthetic after those efforts:

So my Haltech WB2 (two channel CANbus wide band O2 sensor system) probably should have been mounted outside the cabin... but I put it right next to the ECU behind the dash, so running the wiring (that already had plugs on them!) to the sensors was a bit of a drama. I had to buy another (14 way in this case) HD firewall connector and find a place for it to go. This one I decided to put on the far side of the motor, near the dizzy. With a 90degree boot on it (which I cut down after this photo to be a bit "lower profile", it looks pretty neat and just fits in there. 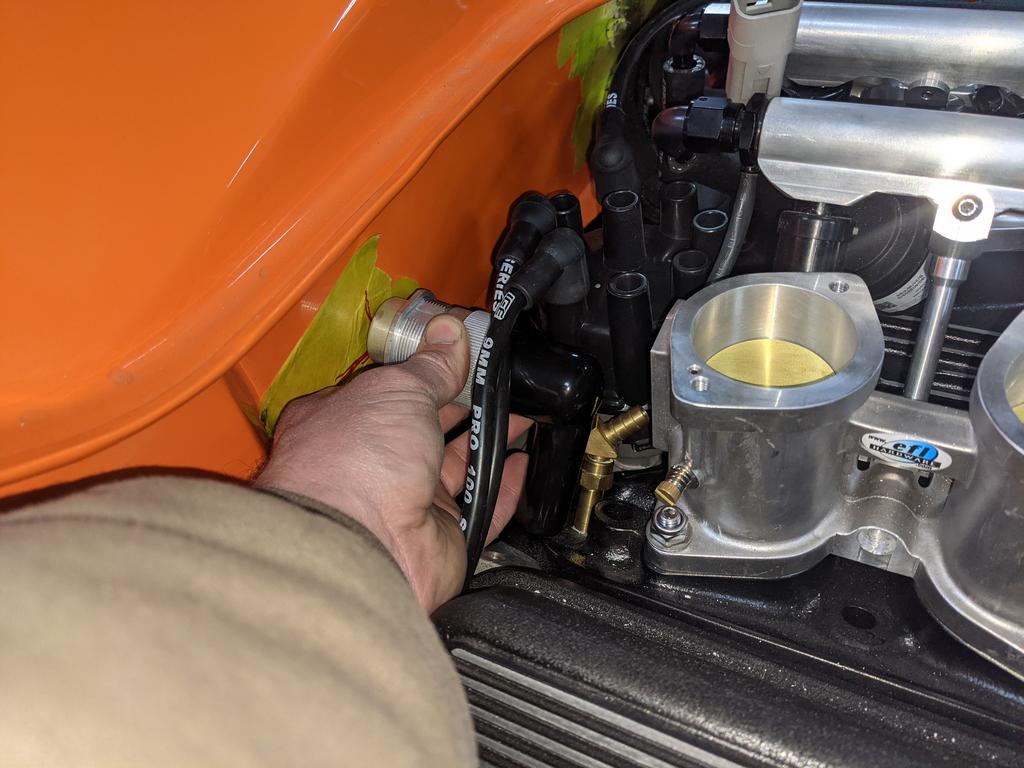 I then soldered some wires onto the reverse switch for the TKO gearbox. These are supposed to have an overpriced connector that looks a bit shithouse in design, so I figured soldering it on was the go and this allowed me to keep the genuine Torana wiring colours. Keep in mind that getting the terminals too hot will loosen them up, so be prepared to shove them back in if the spring pushes them out of place when they're being soldered, haha!

A bit of heat shrink and a wire twist to make it look sharp: 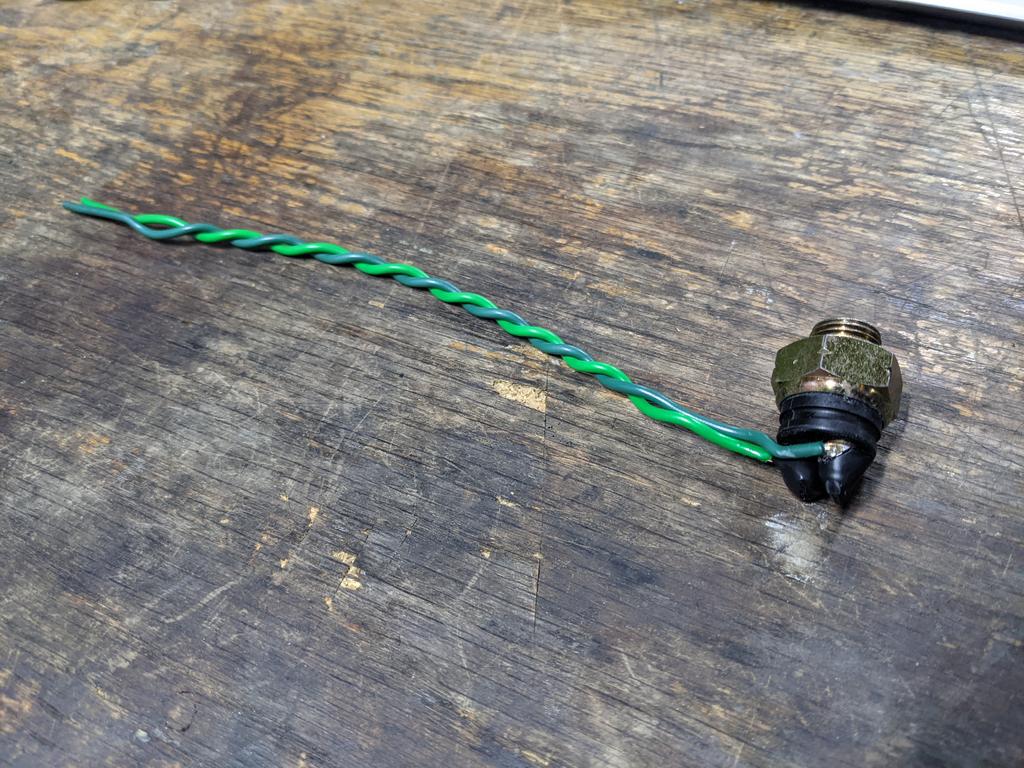 The two Bosch O2 sensor wires cut and terminated for the connector, and the intermediate wiring for the reverse switch, showing the PET braid and Raychem SCL ends "deconstructed" as us Melbournians like to do: 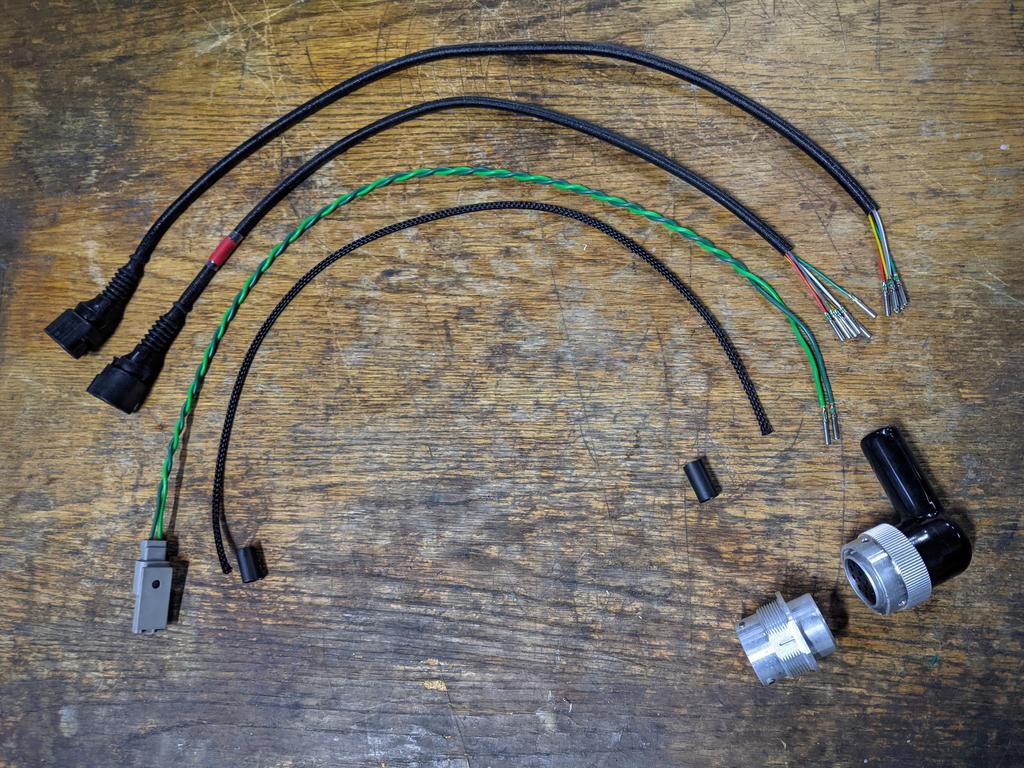 The Red band to me denotes 'Right' for me, and it's just a red bit of electrical tape, covered by some clear heat shrink for durability. Easier than getting bespoke plastic labels printed for wiring, when I only need a couple of really basic identifiers. 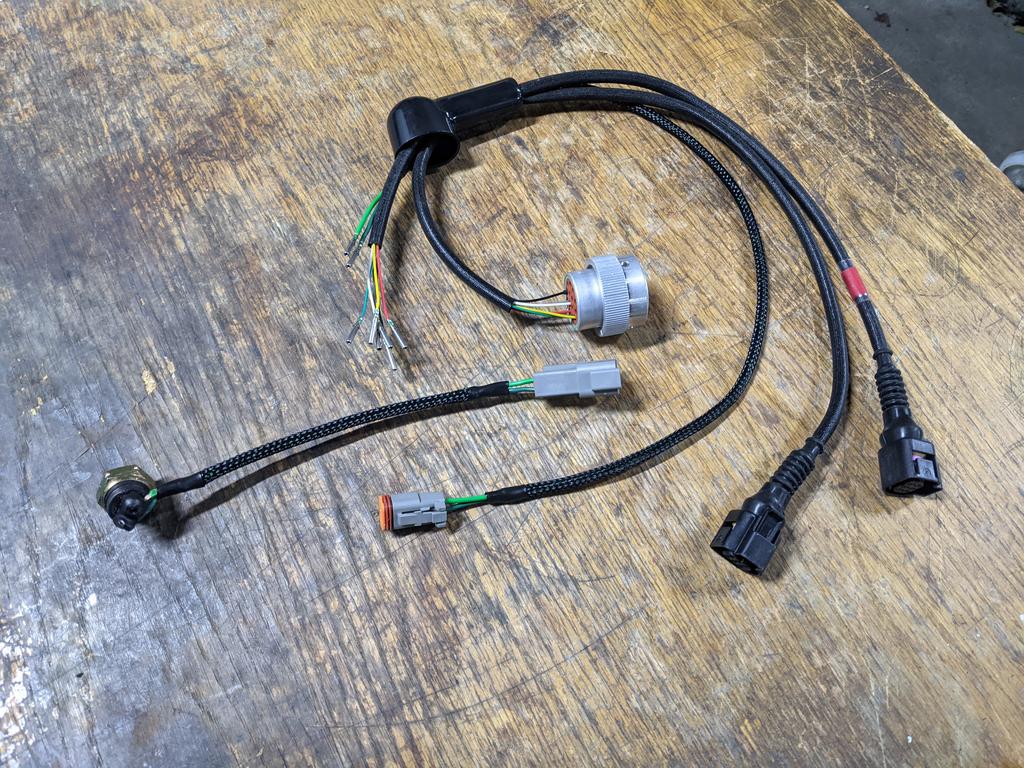 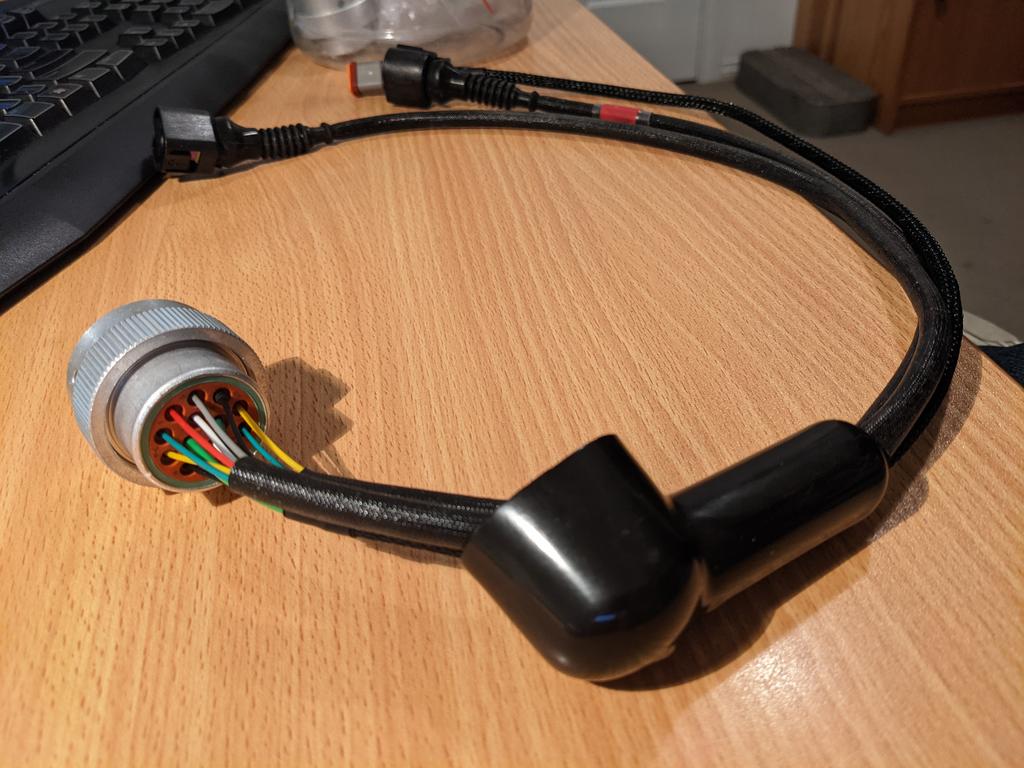 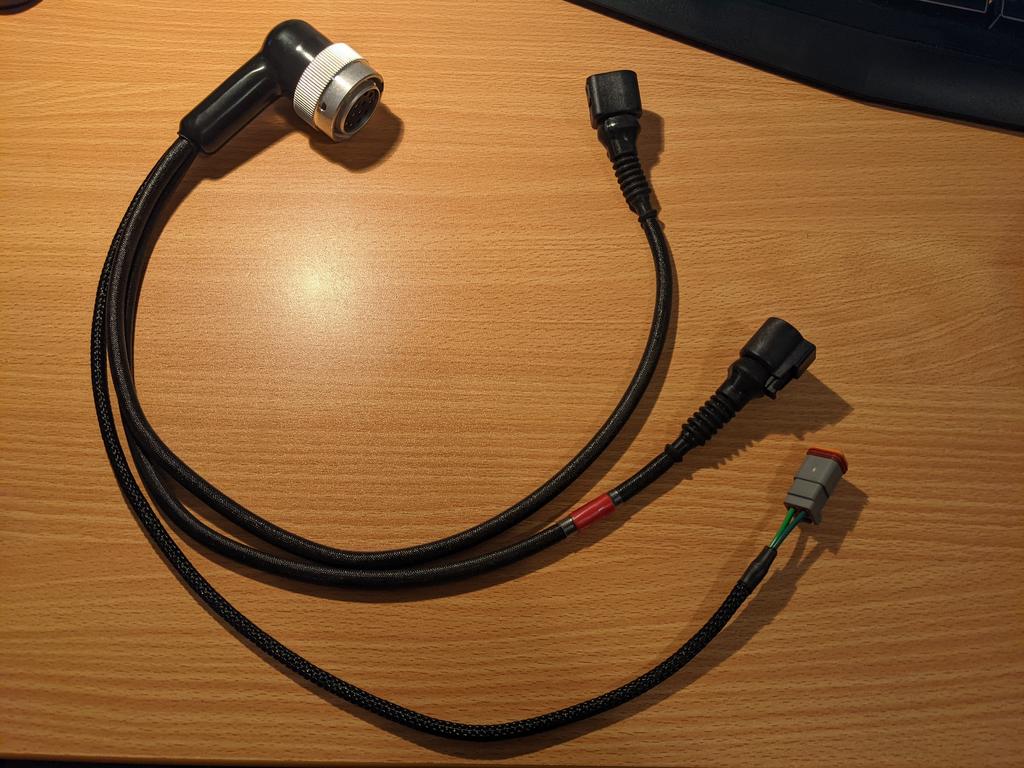 Are those Deutsch connectors or some other brand?

The grey one is a Deutsch DT, and the round one is a 'HD' series thing but the pins/sockets are exactly the same as what a DT uses.

So if you buy the big DT connector set off eBay that comes with the crimpers, then you've got the tools you need.

The black ones are some Bosch product which came with the Haltech WB2 system. All I've done with them is make some small ally brackets to hold them in place on the bellhousing - otherwise they'd just hang down.


1 user(s) are reading this topic