What a shame...   almost like watching a ghost.    Imagine what a Torana-X race car may have looked like with a big set of Sprintmasters on it....

yeah definately needs those guards filled out a bit.

Surly someone can photoshop a racing version, maybe a couple of styles??..  But I would like to see what they would have looked like lowered a couple inches with a set of 7"& 9" Sprintmasters on it...........

I think there was an artist impression of a HDT race car version in Muscle Car Mag a  few months ago....looked good.

Yeah just found it, not bad, but surly someone can do a better job..... 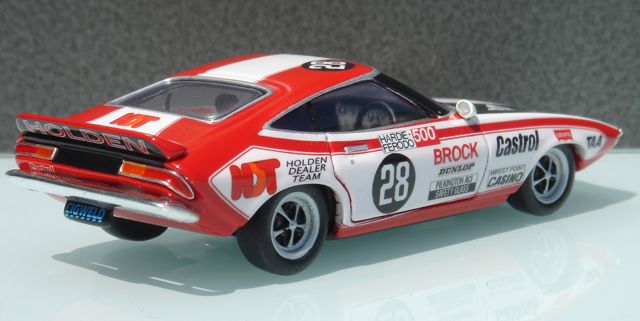 One is getting done up in Melbourne and restored, be interesting when its finished to see what colour its done in. cheers Dave....   each to their own, but I believe they were and still are a sensational looking car...  sure you gotta fill the guards out but all the better..   I would have loved to have seen what the series two GTR-X8 would have become...

It was the first Torana hatch back as well!

I'd have loved to see it as it probably would have evolved if two things hadn't happened: The GTR-X killed off and the V8 XU1 killed off. Imagine that car with a 308 in it. There are 3 x extremely desirable "what if" GMH cars that any of us would want:

It is a real shame we never saw anything but prototypes for any of them.

You'll find Ian the GTR-X wouldn't have seen anything wider than what it got as GMH had no wider tyres available to them.

Was the GTR-X actually a Torana? Or was it meant to be a stand-alone identity on the Torana platform?

From what I have read there was 4 cars made and I think iirc there is 2 left. The one we all see pictures of at the holden? Museum and a privatly owned one.

Thats what I read somewhere anyway.

I was only googling it a few weeks ago an found another forum with a discussion about the privately owned one, pictures of it in the guys shed and a link to youtube showing it being dropped of at a resto shop for work to start on it.
The guy was saying it his girlfriends fathers cars, they then get into the story of how he ended up owning it and he was allowed to take pictures and post online, the other forum members advice to him was MARRY HER QUICK!

So is there proof of where and who owns these cars

It's the just commodores forum. Easiest way to find it is to google justcommodores gtr x

There was a thread on it here ages ago.

A forum member here also started his own discussion forum, but I think its been discontinued.

The forum is still there.

Just had a look.

Go join up and have a look.

The thread starts about 2011 but last post was this year, and the vid of it being unloaded at the resto shop was a Facebook clip not youtube

I didn't need to join up to read it

There was a thread on it here ages ago.
A forum member here also started his own discussion forum, but I think its been discontinued.
They definitely exist,Gene.

Ok thanks so its BS then

Holden stuffed up big time with that car. Put heaps of money into design and producing a car for sweet FA. I wonder how much they lost on that one. i think I have a pic of one with the HDT war paint.  i might draw one one day. I allways thought that a GTR-X kit car may work, just like the several Cobra kit cars.