Tacked up the rest of the exhaust... 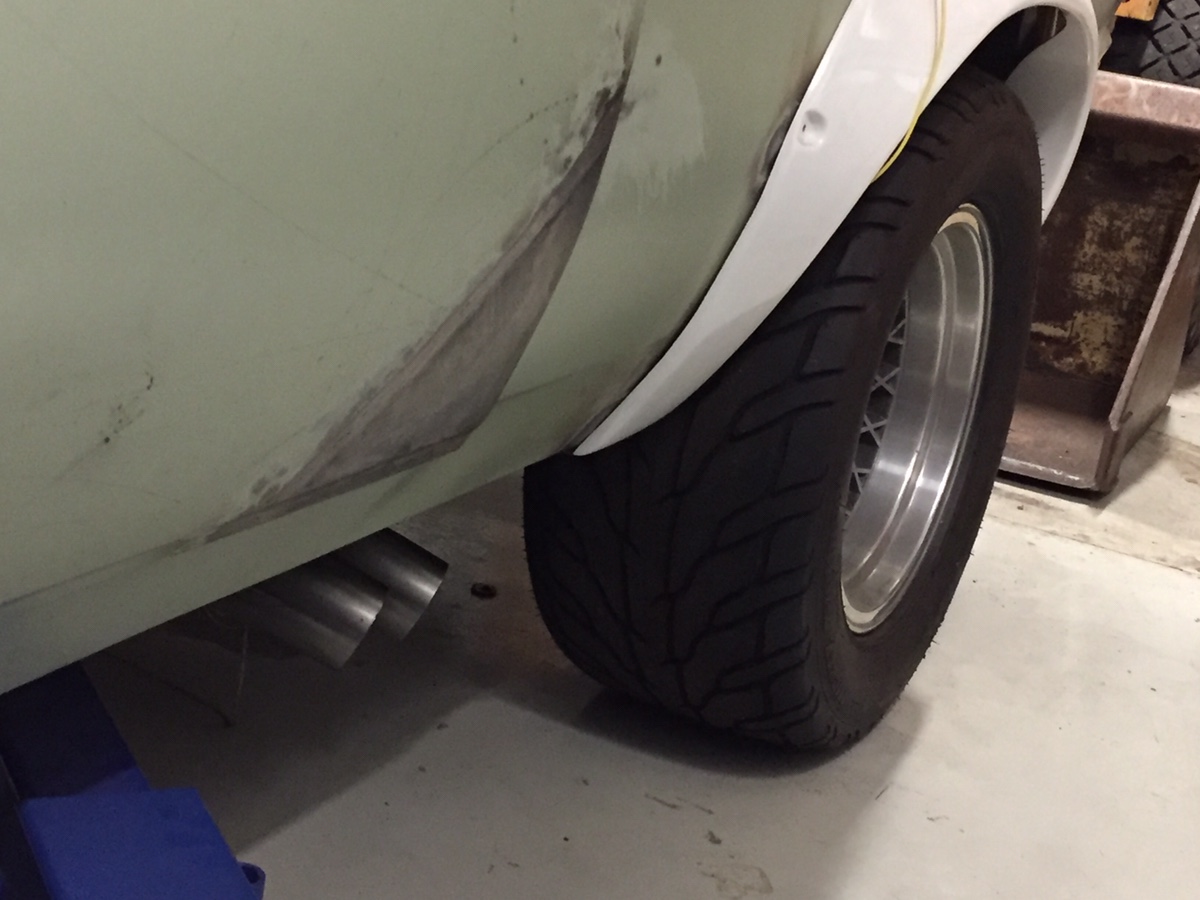 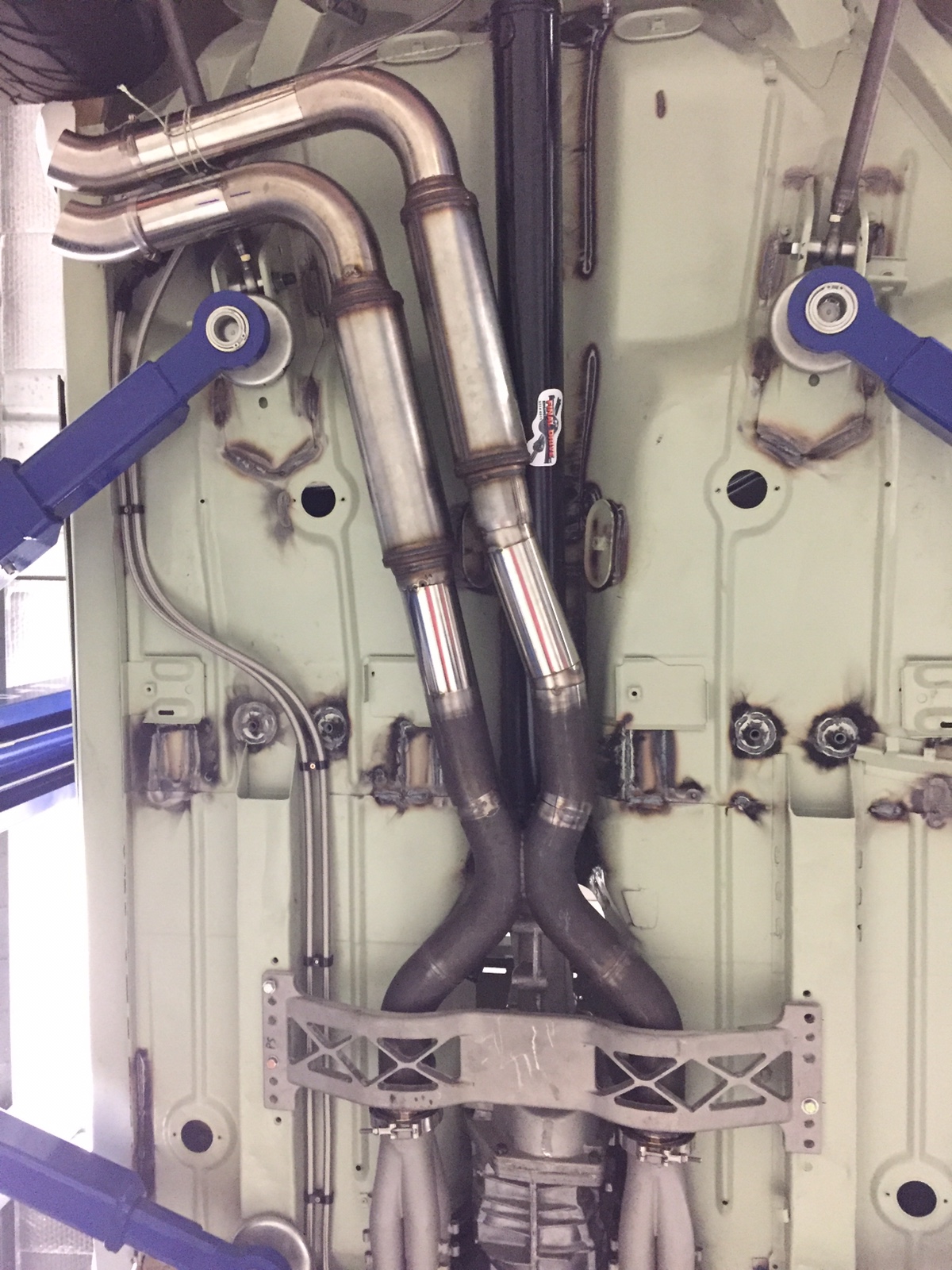 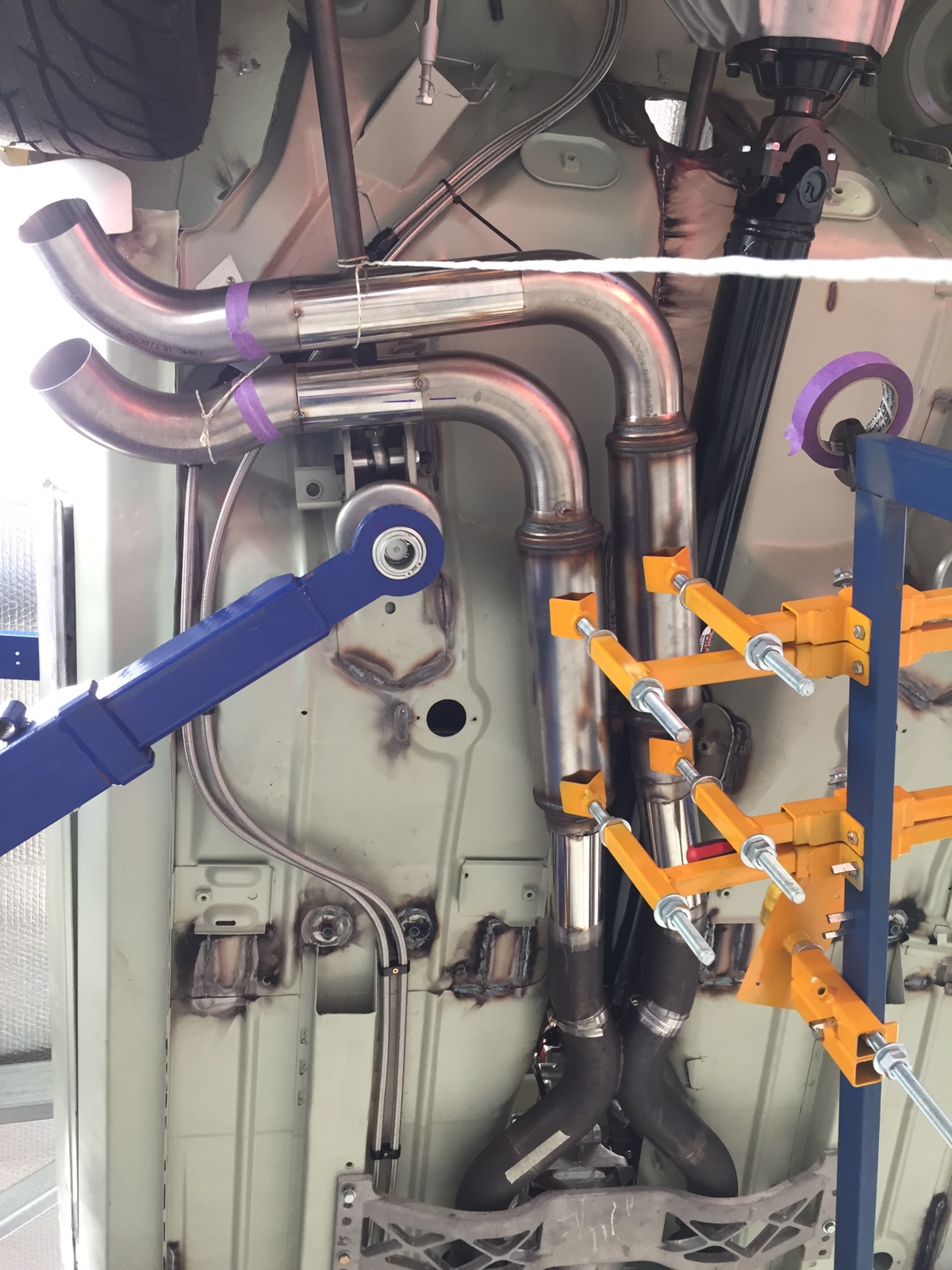 It had been an unacceptable duration between updates, for your audience.

Thank you. Man this car is awesome.

Curiously, you're using the same gearbox crossmember as me, but yours is the opposite way up, with your exhaust above it. I suppose temperature against the floor is less of a consideration in a race car.

Interesting, Heath. I put it in that way because the machines side of the crossmember suggested it was to go against mating surfaces... the bottom side (that you can see in the picture is raw casting.

As far as heat is concerned, I’m trusting in Cerakote to trap some of the heat.

Sorry about the delay in updates, but the reality is, time just hasn’t been there to work on it. 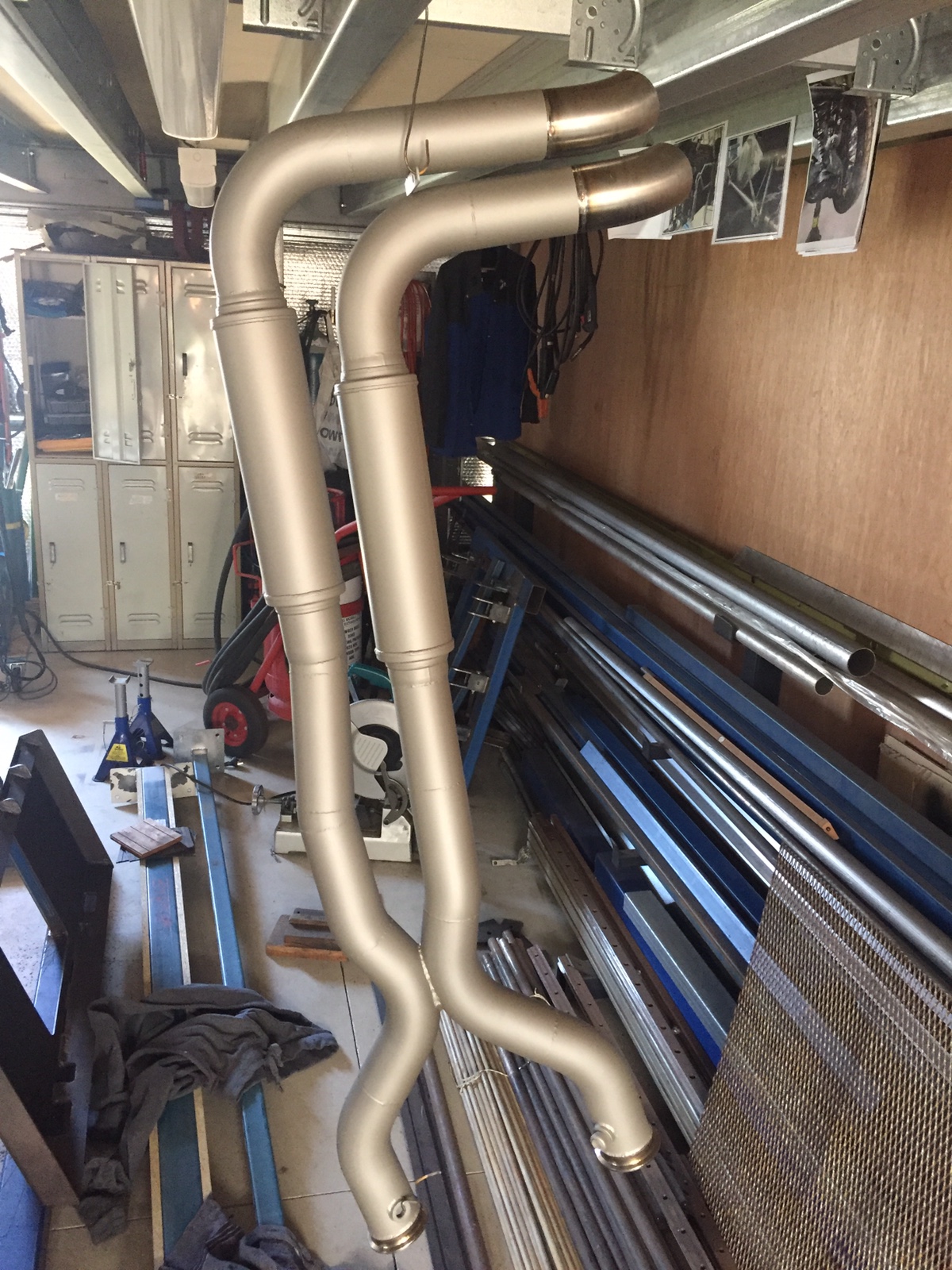 I’m on to some of the wiring now ... just getting the layout and mounting of key stuff like the fuse boxes, ECU, switch panels etc, done with some schematics of the circuits, then I’ll be back in to fabricating. So, hopefully I’ll have an update or two along the way.
I dummied the radiator and hoses in the other day. Again, just to look at layout and clearance for some sort of an air box.

Sorry for the delayed reply... yet again...

dazzatheman... I chose not to connect the chassis rails in to the lower control arm mounts simply because I have quite a substantial roll cage installed. I'm kinda thinking that the cage should be enough to not only save me arse in the event I run out of talent on the track, but also stiffen up the floppy old shell. But, its certainly not too late to make it happen.

I threw a radiator in the car a week or so ago along with some fuel and hooked a battery up to it and cranked it over without plugs in it to confirm oil pressure. All good, plugs back in and kicked it in the guts and it started first pop. Happy days. Now that I've done that and confirmed a bit of the wiring, I'll drop the drive train out of it and put it back on the rotisserie for a bit of panel work (hopefully this weekend) and maybe a bit of paint...

Side note... I bailed out of my small business about 5 years ago and I went back to school to study again, so supporting a family on basically no income over these years has been a tricky one. The priority has been study and cars, as much as I love building them, has had to take a back step... thus the reason for the slow progress. But I'll keep chipping away at what I can spare time and money on and keep it going a bit at a time. I've put my 1969 Camaro up for sale to keep me going... any takers??? https://www.carsales...D-6315818/?Cr=5

Cheers guys and thanks for the encouragement... Its appreciated and motivating.

You will want to brace the lower arm mounts with bracing either inside the car or outside, adding extra welds to the floor is not enough.
I tore them out of mine a few times, after a one particular targa it cracked and opened the floor on both lower arm mounts.
Just an FYI for you

Ps awesome what your doing.

What a great thread, inspiring stuff, even for an LC.

You will want to brace the lower arm mounts with bracing either inside the car or outside, adding extra welds to the floor is not enough.
I tore them out of mine a few times, after a one particular targa it cracked and opened the floor on both lower arm mounts.
Just an FYI for you

Ps awesome what your doing.

Cool, Ozy. I really appreciate your experience in this mate. I'll make it happen. I'll see what I can dig up in the Forum for other peoples solution and get cracking on it... No progress over the weekend.... kids stuff!

My build thread covers a light duty version of the above bracing (if the Photobucket links still work).

turbo76lx's threads should cover it. Like... his purple hatch with the single cam 30DE+T

alot of good ideas out there for it, just a matter of what suits your setup.
Much easier to do it before than later like i had to.

Fella's.... absolutely nothing to report... apart from getting my rotisserie back from a mate... only to find that one of the hydraulic rams was chockers with sandblasting media and needed a rebuild... fun!

Thanks for the encouragement though... it hasn't completely fallen off the list, so I'll be back into it... soon!

You gotta love having "mates"!

Back before I wised-up, every time some "mate" borrowed my car trailer it would come back with damage... lights smashed, wiring torn out, it even came home with the ramps missing once, took the guy a week to 'find' them again, and only then after I threatened to 'pay him a visit'!

Lovin' this build, Marcus. Can't wait to see some video of it on the track!

What is it with borrowed car trailers? I must have towed mine 20,000 kays without putting a mark on it, and yet every time someone else uses it, it comes back damaged. Drives me nuts.

I borrowed a friends car trailer about a year ago.

He had lent it to another bloke who had it in his workshop yard for a fair while.

He was asked to not leave cars on it as it might hurt the tyres.

He had a car on it when I went to get it. Had been on there for ages.

Had a flat when I got it that the other bloke caused.

The owner had asked him to fix the lights as they were pretty crappy when he picked it up.

Owner even supplied the lights.

I rewired the entire rear lighting and clearance lights when I picked it up.

Owner supplied another wheel an tyre that I  fitted.

I bought a couple of good ratchet straps which I gave to the owner when I took it back to him.

I always return things better than when I get them when I borrow.

I have a philosophy though that if I need to borrow often, I buy instead.

Nothing worse than say borrowing drill only to have it stuff up while you have it.

My code would have me buying a new one to replace it or fix it if there is time before the owner needs it.

But you have then paid for something that you dont own, so its wasted money.

With power tools these days, with brands like Ozito and XU1, they are cheap enough to buy.

If it stuffs up after a couple of jobs it doesnt really matter cost wise.

I bought a cheap timber drop saw years ago.

About a hundred bucks. Bought a 50 buck blade to use on it because I didnt like the supplied one.

Built about 20 caravan annexe floors with it, and about 15 decks for caravans.

Even put a cut off disc in it for a while.

Had it over 15 years before it was totally stuffed.

Pretty good value for money that was.

Only bought it for 2 jobs as someone stole my Makita compound saw.

UF UF is the borrowing policy I use, whether I am borrowing or lending.

Yeah... don't get me started on trailers.... I purposely had electric brakes set up on mine... think about it... how many people are going to have an electric brake module installed in their car... So... you know how it goes... Now I end up towing my mates friggin cars here and there... I did have one guy actually install an electric brake controller in a car so he could use my trailer... came back with a flat spot on the jockey wheel, wiring to the airbags needed 'attending to' (its a Tilta airbagged trailer) , the air fittings were 'modified', a bent tail light bracket and scratches in the paint down to the metal... and a flat battery that powers the compressor...

A neighbor at a previous address borrowed a bunch of my tools... helped himself to my gear... I don't even know how he got into my shed either as it was always locked up... brought them back... cold chisel was stuffed, 3 pin punches were bent and I had to reface my ball pein hammer.... he recons he did the wheel bearings on his boat trailer...  then hit me up for some suspension for his Hilux for free (I used to own a 4wd shop)...

Needless to say, loaning my gear out to 'mates' doesn't happen that often. Like you say Rockoz, tools are that cheap these days... and hiring a car trailer ain't that expensive either.

I've spent my Xmas break fixing stuff... not just my stuff, but when ya mates know that you can fix stuff, their problems become my problems...

Anyways... whinging aside... going to do my best to get my Hatch on the rotisserie this weekend... Fingers crossed!!!

Pile of surface rust made it on to the rotisserie 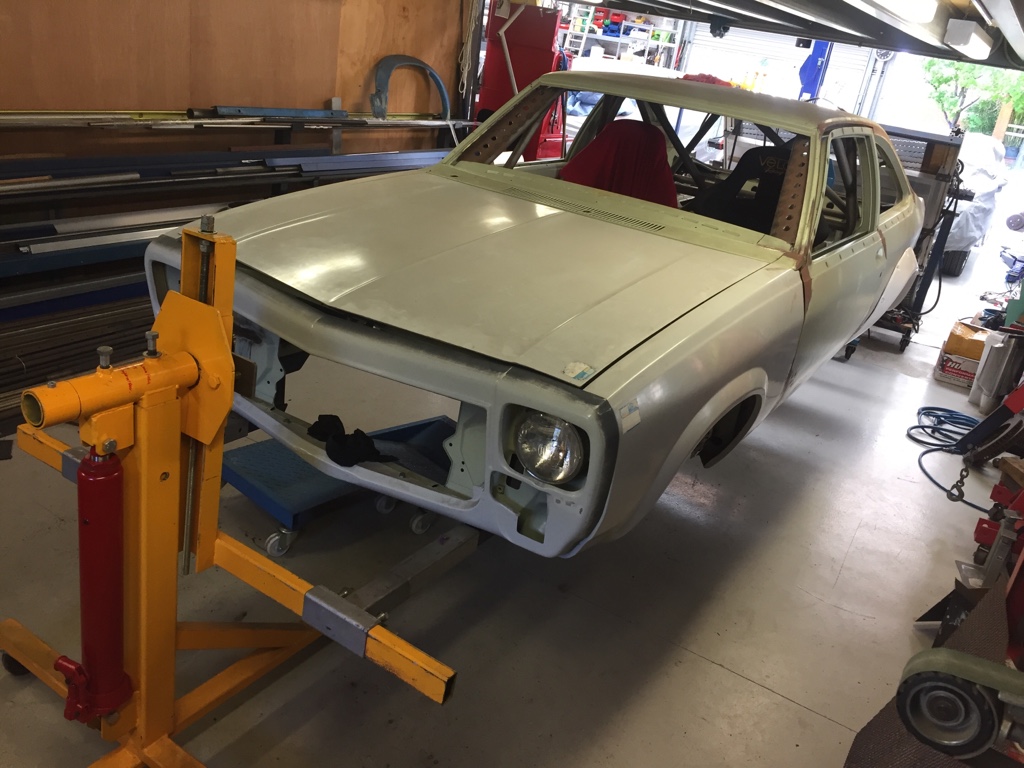 Fellas... anyone in the market for a partially finished LX Hatch race car?
Not to difficult to return to a road car... still licences with a V8!

Just putting the feelers out...

Snap out of this please.

Fellas.. I barely have time to reply to this thread let alone get anything done on the car!!!