Have finally bitten the bullet and started an LJ build forum to replicate a ripper two door I had as a young lad in mid 80's until someone wrote it off by running up the back. Had a stinking hot red 202 with triples and went like the clappers.

Details are as per follows:

I will be asking lots of q's to tap into the incredible amount of knowledge available from forum members.

My first question straight off the bat is should do bodywork/paint first then complete project or get up and running in primer?. My concern is that if paint is smick, it will get damaged sorting out engine bay, brakes, electrical s ect.

As I am a novice it may take a while to post photos, but will start with rolling shell I will be working with (got wheels later on) and a photo of my pride and joy from 1984 before being written off in the background on garage wall

Good luck and all the best. Good to see another hot ol red 6.

there is limited Lc/Lj being built at the moment on the forum so good luck and whats the colour.

Thanks guys, Glacier white with blackouts (profile photo is car I had in 1980's) black interior, gtr dash and steering wheel. Any tips on posting photos, as the one I did so far is too big? Is there a way of re-sizing or cropping, or maybe I have an old browser? Cheers paul

This is the jigsaw puzzle I need to put back together, 85% parts there plus parts I have been collecting over past 12months while garage was being built. will need to do rust/patch repairs when on the rotisserie. will start by "dummying" running gear electrics ect, then strip back to bare metal. any idea why rear shock towers have been cut (hacked out) in exactly the same spot both sides (cross brace maybe) as it is not an area prone to rust. paul

I seem to have lost any option or way of attaching photos as I did in previous posts, any tech gurus out there, do I need to update browser or something, any help would be great as I need to attach lost of pics throughout the build.

Finally got the chance to get bits and bobs out of the back shed and start the "dummy" build of car before rust repairs/paint. This is so that I know exactly what is missing so i can start sourcing new or second hand. First job is to get diff narrowed 25mm each side to allow deep dish rims/tyres to fit under rear guards. Will take to diff place tomorrow to see if when housing is cut down and re-welded, there is enough spline on end of axles to trim 25mm, other wise axles will need to be modified which will double the cost. Rough quote to narrow diff housing $300, extra $300 to modify axles. Might be easier to get 7" rims for rear and sell 8" ones off, but like the look of deep dish on rear. Had a red 202 lying around I will strip down, check over, put mild cam and holley 350 on to start with, but managed to pick up a blue 3.3 over easter which will be the "real" motor, as I believe they are a better block and cranks rods ect. Also triple webers ready to bolt on have a 12 port manifold. A few things I already know I need is middle support brace that goes from nose cone to bumper filler in front of radiator, also all internal door mechs (openers). Will attach more photos as can only upload 2 on this one, cheers paul

this is where brace goes that i am missing between grill and radiator, anyone know correct term?

Thanks mate, appreciate that, I don't suppose you have a set of door mechs do you? thanks paul. I'll wait to see what you have on hand when you check tmrw.

Got two quotes to have diff shortened to fit 8" rims under guards: $800, and $1100, ouch!!. Machining 20mm off inside of rims is not an option, so have decided to stick with 7" rims all round, 225's on rear and 195's on the front as per above. probably looks better anyway as most lc's/lj's have same size wheels all around. Consequently I have 2 x 8" x 15" sprintmaster/gts style rims that have 5/108 stud pattern, zero offset, 4 1/2 backspace for sale at $400 for both, (retail for $345 each). Rims have had tyres fitted but never driven. Includes caps but not wheel nuts (cheap as chips nowadays). Will also post on parts for sale. Happy to swap for a pair of same rims 7" as long as in same or similar knick. Might suit lh/lx with flared guards or maybe Monaro?

Found the brace you were looking for Paul
no door mechs
cheers Gene.

Thanks Gene, can you pm me, also have a guy in melb willing to help out, cheers paul

just a bit of information about 8 inch wide rims and tyres under the back of an LC/LJ wheel arch,

you will need to do a mini tub under the back seat to clear the tyres a little bit like this:- 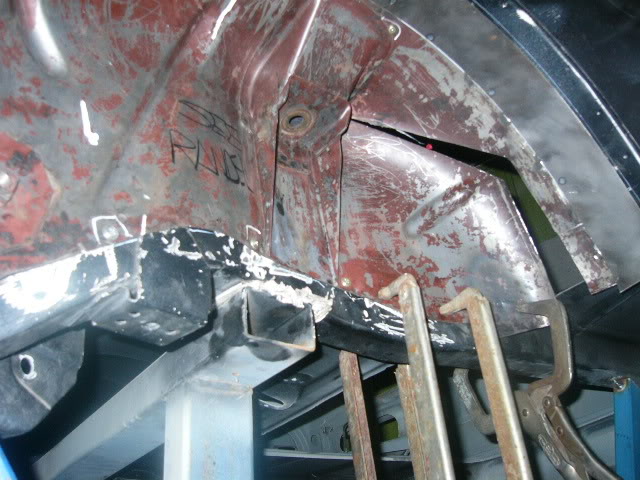 although this one is pinned further back to the chassis rails,

I just opened it from normal like that opening about 2 inches at the front of the arch,

which also needs the rear seat modified to seat better.

and here is what a 6 1/8" off-set rim can do on a standard banjo housing width:- 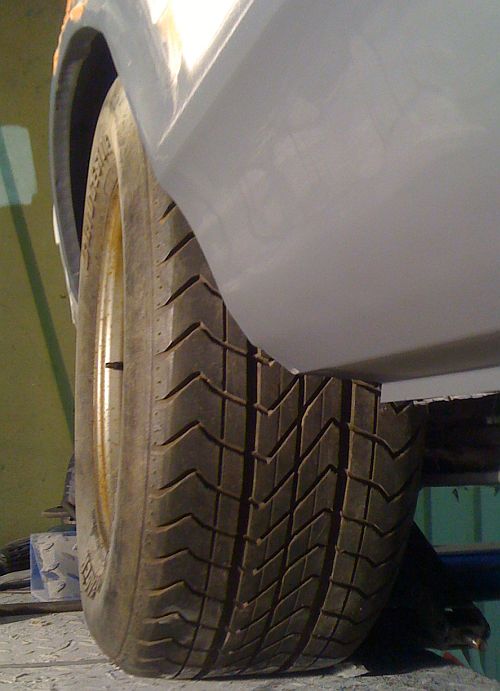 Thanks for that Dave, handy to know. I might just stick with 7" rims as may have a buyer for 8" rims already, and I'm not really happy with how far the wider rims stick out anyway. Nice car by the way, very jealous!

Stripped red motor down and was at 60thou already, really tired, had obviously been burning a heap of oil. Decided wasn't worth new gasket kit/rings ect just to get a dummy motor going, so stripped blue motor down and was pleasantly surprised. Currently at 40thou so still a bit of life left in the block. No other nasty surprises, pistons, rings, head, valves look good. Has a balanced crank, crow cam (not sure what grind yet) and double valve springs. made a home made (patent pending) valve spring remover that works a treat.  Taking everything to engine builder tomorrow for him to check out, if block needs to be bored to 60thou can use pistons from red motor as are ACL items in pretty good nick and engine builder happy to use for re-build. Plan is to build a 200hp (flywheel) 6 which should be achievable with triples I have ready to go.

Time for a progress update, got a fair bit over the past week weeks as have been on leave. Front and rear ends/brakes fully rebuilt. As luck would have it, the previous owner had fitted nolathane bushes in front end. Needed new rotors, pads ect and rear brakes all new. Next job is to run brake lines from master to diff and rebuild steering column. Those with a keen eye will notice rear flexible brake hose is ass about, but I am toying around with running brake lines with fuel lines along drivers side, so am keeping options open at this stage, hence why I havn't dummy fitted diff yet. Will keep posted with progress in next few weeks. Thumbs up to Marty Report for great photos which I used to help rebuild brakes ect. Cheers Paul.

I just found your build thread - you've got plenty of fun times ahead of you.  It's looking good so far.

Thought it might be time for an update as have been side tracked on another project I have: HR Prem wagon I did with my brother. The motor was a bit tired so had a full rebuild and now  goes like the clappers (must be pushing out about 100hp now!). On the torry: have rebuild the steering column, fitted all the fuel/brake lines and painted bit and bobs ready for when the engine comes back (in pieces) from engine builder this Friday. Will post more photos of the engine build as it progresses, cheers paul

Have put motor back together after coming back from machine shop: Blue 3.3 Commy Motor, 60thou over, balanced crank and bottom end, nice lumpy crane cam with matching springs, oversized valves, and the piece de resistance: Triple 45 Webers. Hope to drop in over the weekend and then muck around with accelerator/clutch set up and  wiring so it can be fired up, hopefully in the upcoming weeks, Cheers Paul.

Looking very nice Paul!!! I just went through the same process with mine... you have a nice combo and will go very well...